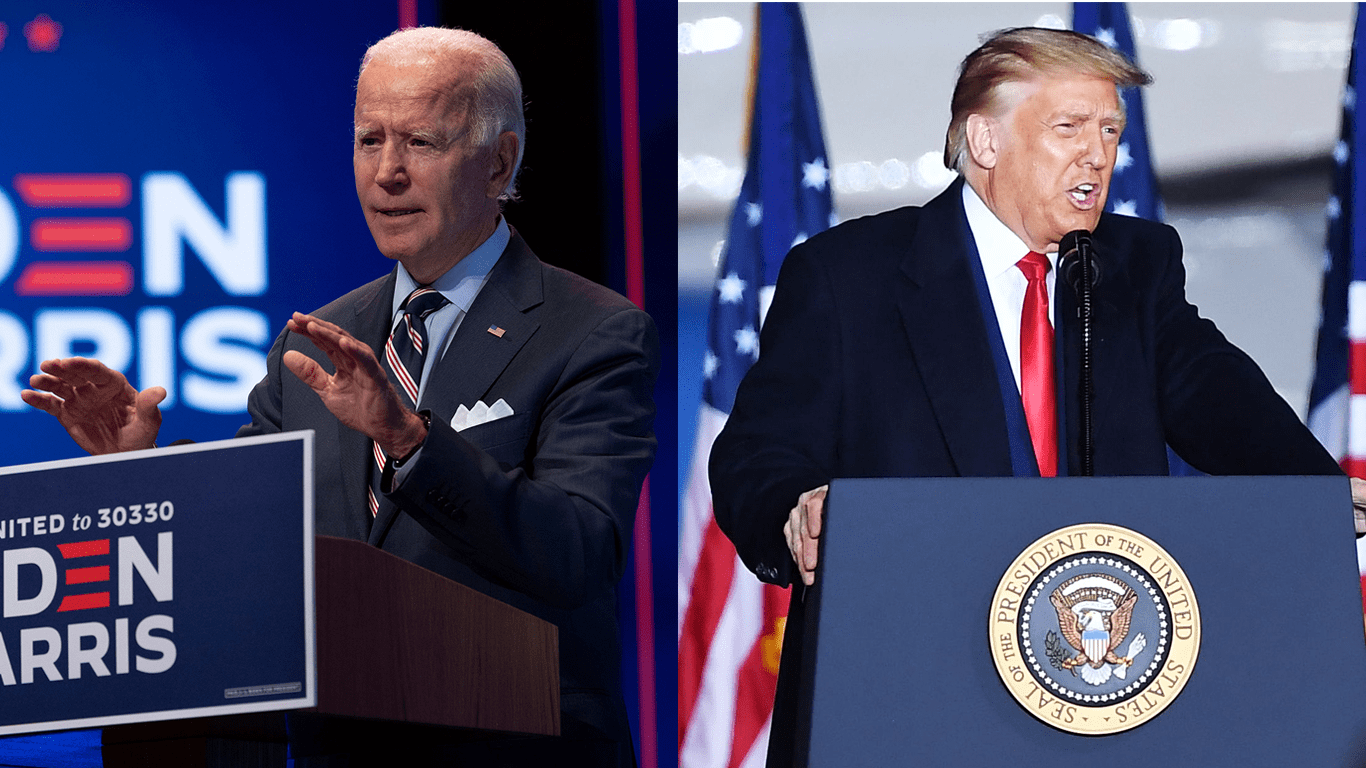 The next U.S. president will end up inheriting an economy that’s been badly damaged by the COVID-19 crisis, which has led to record job losses over the past year, a potential eviction crisis, the shutdown of businesses across the country, and exorbitant medical bills.

After the 2020 election, either Democratic nominee Joe Biden or Republican Donald Trump, will have to grapple with the economic and financial fallout, along with other economic issues that had existed pre-COVID.

So how ambitious are their plans and how do they stack up to previous nominees? When it comes to Biden, Vincent Hutchings, a professor of political science and Afroamerican and African studies at the University of Michigan, said that his ideas are more far reaching.

Biden’s plans go further than previous Democratic nominees’ when it comes to issues like health care options, education and housing inequity, according to Hutchings. For example, he’s pushing for a public health insurance option as an alternative to options from private insurers.

However, he noted that relative to the other candidates in the Democratic field, like Bernie Sanders who has advocated for Medicare for all, Biden is moderate.

Meanwhile, Trump’s policy plans have been vague, with the Republican party deciding not to write a platform at their nominating convention.

“There’s traditionally a platform where the incumbent party seeking re-election lays out its goals if it were to receive another term of office,” Hutchings said. “They haven’t really done that here. We should just acknowledge that the current administration is certainly not a traditional administration.”

Eric Heberlig, a professor of political science and public administration at the University of North Carolina Charlotte, said he thinks the candidates are running more on their leadership and their characterizations of the other political party.

“Your candidates are really running based on major symbols on the performance of the incumbent party, and laying out policy proposals more as a way of saying, ‘These are my priorities. These are the things I want to work on,’” Heberlig said.

Some of Biden’s financial and economic plans in response to the COVID-19 crisis include:

When it comes to another round of stimulus checks, Biden hasn’t fully committed to the possibility, but said he would send them “should conditions require.”

Departing from other members of the Republican party, Trump is calling for a massive economic relief bill and more stimulus payments. According to the Washington Post, Trump has expressed support for a $1.5 trillion plan unveiled by the Problem Solvers Caucus in the House, a bipartisan group. That plan includes another round of $1,200 stimulus checks.

In a tweet this week, Trump has called for the GOP to “go for the much higher numbers.”

Some of the the Democratic nominee’s key plans when it comes to tax policy include:

An analysis of most of the policies in Biden’s tax plan from the nonpartisan Penn Wharton Budget Model found that between 2021–2030, Biden’s plan would raise $3.375 trillion in additional tax revenue, increase spending by $5.37 trillion and decrease the federal debt by 6.1%.

At the beginning of his term in office, Trump signed the Tax Cuts and Jobs Act into law, which lowered the corporate tax rate from 35% to 21% and changed the income level of individual tax brackets (the highest tax bracket saw their rate fall from 39.6% to 37%).

While Trump said the economy would grow between 4% and 4.5% after his cuts, it ended up growing 2.9% almost two years after it was signed into law. Joel Slemrod, an economics professor at the University of Michigan, told Marketplace that while the economy had been performing well since the tax cut, it was already doing well the past several years.

Compared to Biden’s plan for capital gains taxes, Trump wants to reduce the rate from 23.8% to 15%. Earlier this year, the president had promised a “Tax Cuts 2.0 plan” that would be released this month, although he has yet to deliver it. One of the potential items in that proposal would include a 10% cut for middle-income taxpayers, according to National Economic Council Director Larry Kudlow.

Trump also recently deferred the collection of payroll taxes, which began on Sept. 1 and lasts until the end of the year. That puts a pause on taxes on the employee portion of Social Security, which is 6.2% per paycheck.  Trump has pledged to make that cut permanent; however, he’d need Congress’ approval and right now, the plan is meeting resistance from businesses in the public and private sector.

Marketplace reporter Nancy Marshall-Genzer reached out to the Penn Wharton Budget Model and asked if they had also analyzed Trump’s tax policies, but they said they hadn’t because his policy proposals were too vague to run this level of analysis.

His plans for student debt include:

Under the current Trump administration, the government has put a pause on federal student loan payments until January because of the COVID-19 crisis and federal Pell Grants are also now distributed year-round, instead of just the spring and fall semesters.

While Trump hasn’t formally released a plan for student loans tied to his re-election campaign, he outlines several changes in his 2021 budget plan, which include:

The Democratic nominee has proposed investing $640 billion over the next decade for housing that’s affordable and also accessible to those with disabilities, which would include:

Under the Trump administration, the Treasury and Housing and Urban Development departments have also unveiled housing plans that end government control of Fannie Mae and Freddie Mac, which are companies that control half of all mortgages in the U.S. One of the main goals in this plan is to open the housing market to more competition from private companies.

However, in order for Fannie and Freddie to be released, they’ll need to have enough capital to protect them from future losses. They could stop giving the Treasury Department their profits, but saving that money won’t be enough — they’d have to sell shares to private investors around the public market.

Over the summer, Biden announced a $2 trillion plan to combat climate change and invest in clean energy, with the long-term goal of achieving net-zero emissions by 2050. His plans include:

Biden has also said he wants the U.S. to rejoin the Paris Climate Agreement, which Trump withdrew from in 2017. Under the agreement, about 200 countries have pledged to reduce carbon emissions.

The effects of climate change have especially been in the national spotlight recently as wildfires have spread across the West Coast, which experts attribute in part to climate change. Both Biden’s and Trump’s responses to these disasters have highlighted their differences on the issue. While Trump blamed the wildfires on forest management, Biden has acknowledged the role of global warming in these disasters and called Trump a “climate arsonist.”

Trump once called climate change a “hoax,” despite near universal consensus from the scientific community that humans are causing global warming and climate change. Hutchings said that Trump and many other Republicans don’t have a solution to the climate crisis because they don’t believe there is one in the first place.

In response to the wildfires, Trump has inaccurately suggested that global warming will reverse itself. “It will start getting cool, just you watch,” he said.

During his time in the White House so far, his administration has rolled back 100 environmental regulations, according to the New York Times. Some of the rules he’s reversed include no longer making oil and gas companies report methane emissions; lifting a ban on drilling in the Arctic National Wildlife Refuge; and weakening automobile fuel efficiency standards, which is expected to release 1 billion metric tons more carbon dioxide into the atmosphere.

Calls for economic reparations for the African descendants of slavery have intensified in recent years, with Democratic candidates voicing their support on the issue in some form or another.

The House of Representatives wants to establish a federal commission that would create a proposal and remedy plan, which Biden has endorsed.

However, he pointed out that Biden has not outright said he’s in favor of reparations. Given the amount of racial inequities in the U.S., Hutching said he thinks anything short of reparations is unlikely to be effective.

These figures are reflective of how most of the wealth in the country is skewed toward a relatively small number of wealthy, mostly white, people.

Biden has also released plans aimed at investing in the “economic mobility” of communities of color. Some of his initiatives would include:

Trump, on the other hand, has shut down the possibility of reparations. In an interview with The Hill, he said “I don’t see it happening, no.”

During his time in office, Trump has taken credit for the historically low unemployment rate for Black Americans, which hit 6.8% in early 2018. However, unemployment among white workers at the time was just 3.7%. Valerie Wilson, the director of the Economic Policy Institute’s program on race, ethnicity and the economy, said that “even when we look at people with the same levels of education, we typically find that the Black unemployment rate is really close to, if not higher than, double the white unemployment rate.”

The Tax Cuts and Jobs Act, which Trump signed in 2017, also established opportunity zones, a program that gives capital gains tax breaks to investors who use capital gains to invest in low-income communities. A majority of residents in these zones are people of color. Kimberly Johnson, a professor of social and cultural analysis at New York University, said that the effectiveness of opportunity zones is mixed.

“I think that [to] the extent that they can work, they are places where there’s a lot of close collaboration between investors, local governments, community groups, that really are focused on what works best for a particular community,” Johnson said. “Where it doesn’t necessarily work is where something is built on the assumption that if we build it, people or businesses will come, and then that doesn’t quite happen.”

One of Biden’s main priorities when it comes to health care is protecting the Affordable Care Act. His plans for health insurance include:

Unlike other Democratic candidates such as Bernie Sanders and Elizabeth Warren, Biden has backed away from Medicare for all and has said he would veto it due to the costs. That position has created a divide between the party’s center and those on the left.

“But he is pushing for a public option to the Affordable Care Act, which is further than Obama pushed it,” Hutchings said. “[Obama] did campaign on the notion of a public option, but then he backed away from it.”

Trump, who has repeatedly tried to end the Affordable Care Act, has yet to deliver a health care plan of his own.

During his time in office, Trump implemented work requirements for Medicaid recipients for the first time ever, which had been a long-time conservative goal, and eliminated an Obama-era regulation that prohibited discrimination in health care against transgender patients.

Trump also signed an executive order that would require hospitals to disclose the rates they negotiate with insurance companies. Larry Levitt, the executive vice president for health policy at the Kaiser Family Foundation, has said the move is “quite sweeping,” but that the enforcement of it is “quite weak,” with the maximum fine for hospitals being $300 a day.