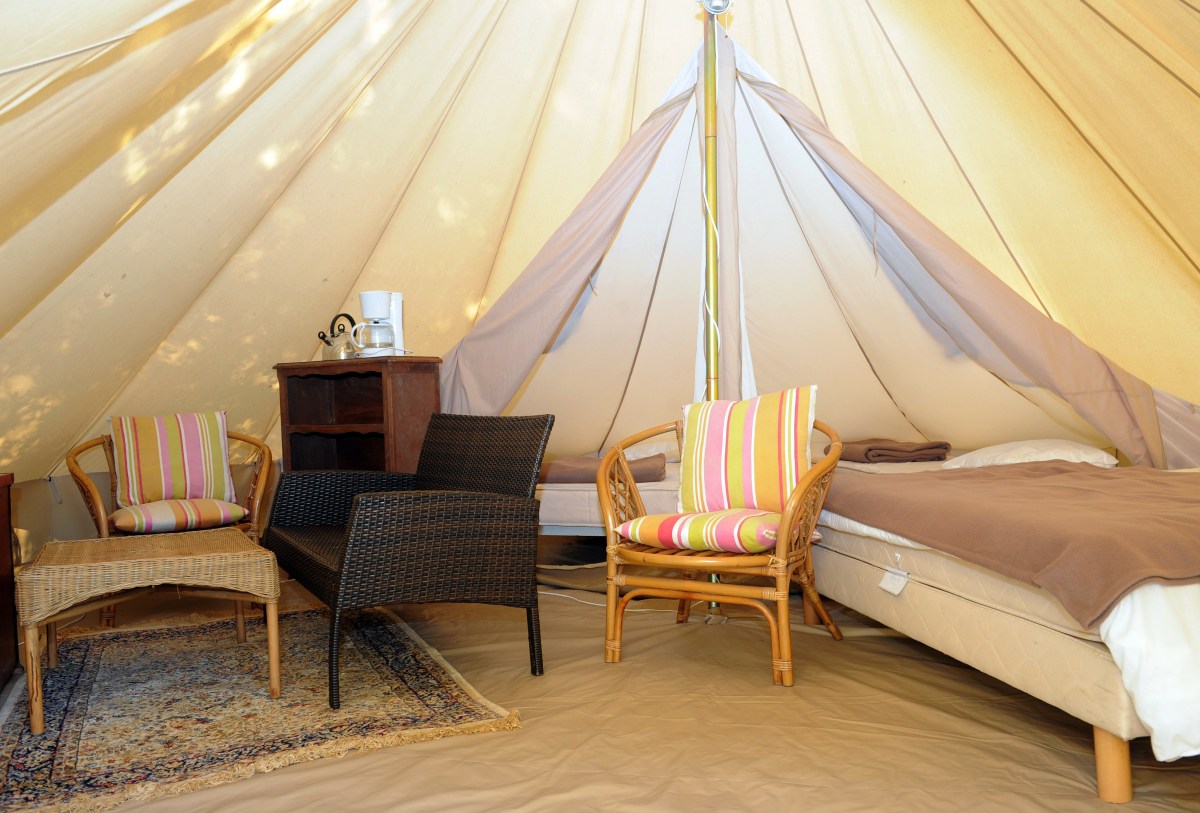 Billy Scafuri grew up in a suburb of New York City and vacations with family and friends usually involved flying to high end resorts in warm places. The pandemic has changed all that.

Everything shut down just as he was planning a trip for his first wedding anniversary and the idea of flying or even spending time in a hotel felt like a bad idea. So Scafuri, who now lives in Los Angeles, decided to take a cue from his more outdoorsy California friends.

“Camping was the perfect socially distanced getaway,” he said.

For the special occasion, Scafuri decided to go a little higher brow than the usual sleeping bags and campfire scene.

He booked the trip through a company called Hipcamp, which offers an online reservation platform similar to Airbnb where landowners rent private campsites. Vacationers can stay in tiny homes, yurts, or treehouses with electricity that range from comfortable to extravagant options for glamorous camping, or “glamping.”

Scafuri rented a manicured location in a small town near Santa Barbara that offered a camp kitchen, a private waterfall to hike to, and a relaxing woodfire-heated jacuzzi made from a giant ocean buoy.

“It actually felt more fun than regular camping. You didn’t just have your little circumference of a tent, you had a designated area that could all be yours, completely isolated.”

Companies like Hipcamp are boosting incomes of landowners in rural areas by offering easy ways to rent out the private campsites to potential campers.

The company is currently sending more than three times as much money to their hosts as they were this time last year, said Ravasio.

Hipcamp isn’t alone in the business. It’s joined by a few other companies, including Tentrr and Under Canvas. And even Kampgrounds of America (KOA), the largest private campground operator in the U.S., has been expanding from traditional campgrounds into glamping as well.

Online glamping platforms have taken off this summer because they offer easy ways to book campsites that provide the comfort of an all-inclusive resort experience in the wilderness.

“People make people uncomfortable now,” Jenni Corwin, director of consumer insights for J.D. Power. “We’re seeing this become more widespread across all generations, based on necessity at this point.”

The pandemic has helped the glamping trend leap from niche to more mainstream. Tentrr, which began in New York in 2016, has since expanded to around 860 locations in 42 states and caters to city-dwellers looking to commune with nature. Revenue has skyrocketed, CEO Anand Subramanian said.

“After two months of people being quarantined, it just felt like everybody just wanted to take a break.”

Tentrr owns and builds all the equipment on-site like wooden platforms with canvas tents, full-size beds, and outdoor kitchens with comfy adirondack chairs so urban campers don’t need to store any camping gear at home.

“We’re not just a listing company, we actually build out the camp locations ourselves.”

Tentrr has a revenue sharing agreement with landowners who receive the 80% of the listing price in exchange for use of the land and the license to operate a Tentrr location. And its sites were almost completely booked in August, Subramanian said.

And Tentrr is not even the most high-end when it comes to camping luxury.

Under Canvas describes their type of glamping as a “safari-like experience” complete with catered meals, en-suite bathrooms, and wood-burning stoves, plus concierge guest services with camp activities and adventure bookings.

The company has locations next to Instagrammable national park destinations like the Grand Canyon, Zion, or Glacier.

Normally, Under Canvas opens up in the spring but, like many other travel companies, the pandemic forced it to delay the start of the season. Once the summer got going, calls and reservations started coming in.

CEO Matt Gaghen said revenue in July and August was up 30% over last year’s numbers as the pandemic fueled what he says is a growing consumer trend in isolated eco-tourism.

“It’s exposing us to a new customer for sure,” he said.

Meanwhile, KOA was already offering some higher-end accommodations such as deluxe cabins and campgrounds with amenities like WiFi and laundry. This summer, KOA opened its own glamping resort called Terramor, near Acadia National Park in Maine.

Whitney Scott, vice president of marketing at KOA, said that the pandemic has increased interest in what the company calls the “bathroom factor.” Camping that offers private bathrooms so people can feel safe not sharing their space with others.

For KOA, glamping options have opened up their customer-base to people looking for not just private bathrooms but a hotel-like experience outdoors.

“Over the past five years, KOA has increased its camper nights within its lodging options by nearly 42%,” said Scott.

The boost in glamping also comes at the same time the rest of the hospitality industry is taking a major hit. At the end of August, the American Hotel and Lodging Association released a report that said 65% of hotels remain at or below 50% occupancy, which makes it hard for those businesses to break even and pay debt.

And Murray Cox, a community activist who compiles data on short-term rental platforms for his website Insideairbnb.com, said that bringing people from other cities or regions to a small community raises the risk of spreading COVID-19.

“Are these landowners following the local laws that are to protect the rural communities?” said Cox.

There is also a lack of oversight governing sanitation and land-use regulations that are often circumvented with short-term rental platforms, said Cox.

Despite glamping’s gains, there’s a glimmer of hope for hospitality, Corwin of J.D. Power said.

But for Scafuri, getting outdoors with the people he loves might become a bigger part of his travel plans in the future.

“If you can just, like, tuck your wallet away for four days and go out in nature, you know, for my money, that’s a rock solid trip,” he said.